NORA’S REVIEW OF The Love Letter 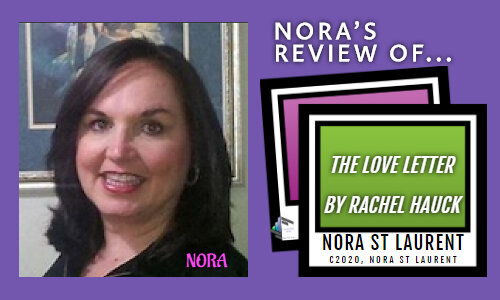 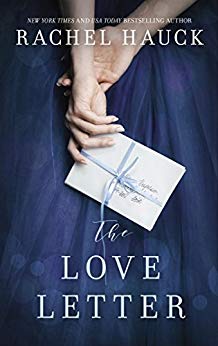 NORA’S REVIEW: Outstanding! Rachel Hauck’s best novel so far. This time-slip story has it all from hero’s past and present, getting a behind the scene tour of a movie set and a peek at the creative process of making a film. Then there’s the battles that took place in South Carolina that will rip at your heart. There are characters you can cheer for, cry with and feel not only their agony but their triumphs as well!

It was an engaging read in both time lines right from the start with actress Chole trying to break out of being the “Queen of death scenes.” Would Hollywood ever see her as something more? She wants to break their type casting; when Chole reads a script, she seeks to audition for. The movie is Bound by Love written by a new scriptwriter. She wanted the part of Esther Kingsley, a woman facing tough times during the Revolutionary War. She’s torn between being loyal to her father and/or following her heart and be with the man she loves, Hamilton Lightfoot. They learn that, “Bravery is fighting in the midst of your fear, not in absence of it.”

All the leading characters Chloe, Jesse, Esther and Hamilton face some hard truths about their life’s choices, faith, and forgiveness not only for the people they’ve hurt and/or hurt them but for themselves as well. It was refreshing to see that none of these characters were running off to get involved physically and then wonder about all the ramifications of their relationship later. Chloe had done that. Everything she rushed into died like the many roles she played.

I liked both leading lady’s loyalty and their search for true love. Chole and Esther ask themselves the question, what is real love.? What does it look like? Would their soul mate ever be found? Did it really exist?

I liked what Chole says this about marriage, “Marriage is the one place where no one can go but you and your spouse. One man. One woman. In a union that has baffled humanity since the beginning of time. It’s a treasure, something to be guarded with every part of your being…joined by God.”

I liked that they were flawed characters testing the waters of faith, church and their struggle with trusting God and His best plan for their lives. So far as they could see things weren’t adding up to be so great. It was down right horrific in some of the things they experienced. Many discovered that forgiving others was easier then forgiving themselves

I relished hanging out with these characters past and present. I enjoyed all the twists, turns, and surprises I experienced with them on their journey. Don’t rush through this, you’ll want to savor every word. This makes for a great book club pick. The author includes ten discussion questions to help make your book club experience lively! I highly recommend this novel for a great read and for your next book club pick. This is a keeper to be enjoyed over and over again!

Disclosure of Material Connection: I received a complimentary copy of this book from Thomas Nelson through NetGalley. Opinions expressed in this review are completely my own.. I was not required to write a positive review. The opinions I have expressed are my own. I am disclosing this in accordance with the Federal Trade Commission’s 16 CFR, Part 255 “Guides Concerning the Use of Endorsements and Testimonials in Advertising”

A NOTE from all the authors at Christians Read:

We wish you a joyful, safe and blessed Valentine’s Day!

USA Today Bestselling and Award-Winning Author of 50+ books, short stories/novellas and hundreds of articles. Published in as many as 63 countries and recognized by Who's Who in the World as an author and an educator. Former featured Columnist for Social-IN Worldwide Network and Book Fun Magazine. Sponsor/Founder of ChristiansRead.com. Vicki's latest novel is in the Behind Closed Doors: Family Secrets series, Blood Strangers. FMI visit www.vickihinze.com.
View all posts by Vicki Hinze →
This entry was posted in Nora St. Laurent, Uncategorized and tagged #time-slip, Chloe, Clean Wholesome Romance, contemporary, Hamilton, Historical, Hollywood, Jesse, Revolutionary. Bookmark the permalink.

2 Responses to NORA’S REVIEW OF The Love Letter

This site uses Akismet to reduce spam. Learn how your comment data is processed.